Not My First Rodeo

This is now the third time that I’ve created a light painting at Little Log House Pioneer Village. Both of the first two were created for Darrick and April. The first, created as part of their engagement session, was at the Old Mill on the site. 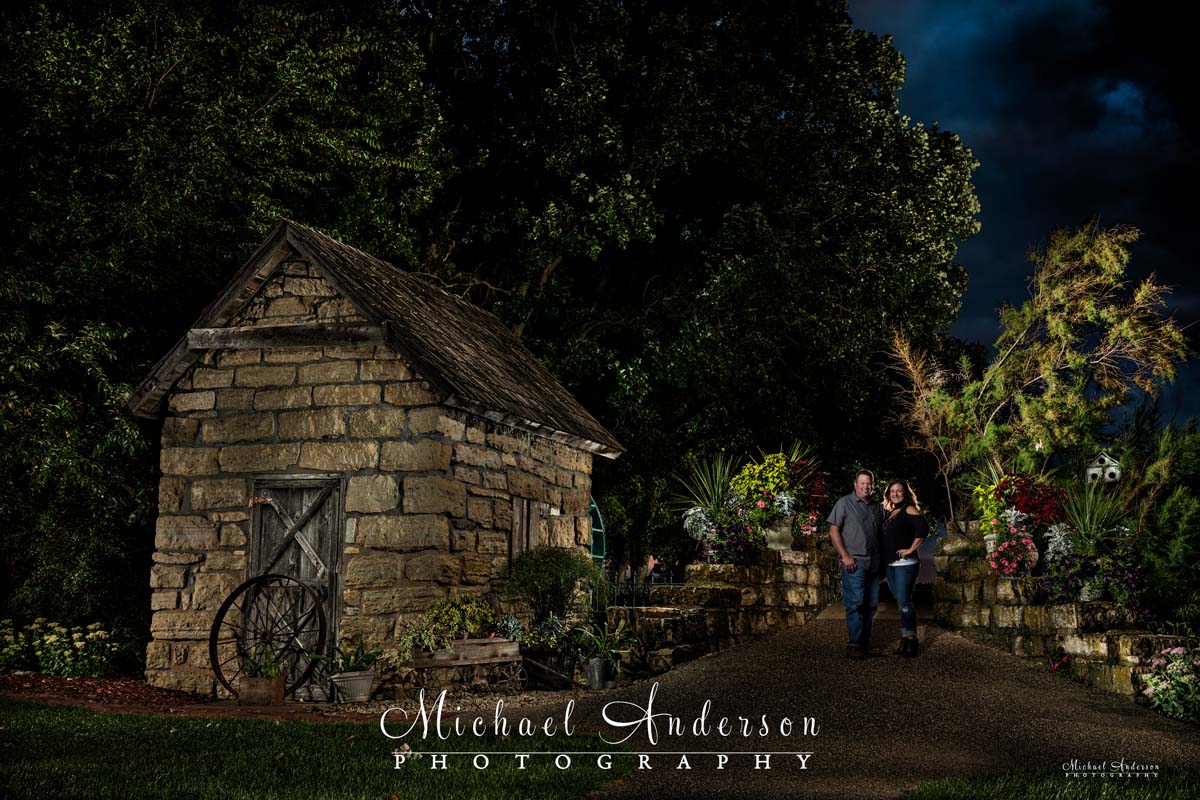 Then, on their wedding day, Joannie and I created this stunning light painting at the “Chevy Dealer” building that Steve and Sylvia Bauer have as part of their amazing collection of restored buildings at Little Log House Pioneer Village. I met Cody at the Victoria Classic Car Night back on June 22nd. We struck up a conversation about his cool Camaro and also talked about the possibility of creating a light painting. A couple of weeks later, we both were at the show once again. We talked more about the car and he mentioned that he was going to be proposing to his then-girlfriend, Sierra, soon and that it would be cool to light paint the Camaro as an engagement portrait. He mentioned Little Log House Pioneer Village as a possible location. Well, it just so happened that I could show him both of Darrick and April’s light paintings that I’d done there. He was in! Now, he just had to propose!

Well, on August 4th, Cody did indeed propose to Sierra at the Brule River at Judge Magney State Park near Grand Marais, Minnesota. And Sierra sealed the deal by saying yes! Cody was kind enough to share a picture of the historic event for me to share with you! Cody proposes to Sierra at the Brule River on August 4th!

About That Camaro Z28

Cody has given his 1980 Chevrolet Camaro Z28 the nickname “Mr. Blue Sky”. This Z28 was built in Van Nuys, CA, and has a build date of the third week of March 1980. The car was sold at Johnson Motors in Waverly, MN during the early summer of 1980.

Cody is the second owner of the car. He purchased it from the son of the original owner. He bought the car his junior year of college for $2,600. It was in rough shape but still had a running motor and transmission. He fixed up the front and rear brakes and got the car more drivable, and about 10 miles after buying the car – the motor spun two-rod bearings.

He pulled the engine and had it rebuilt at Powerline Performance Machine Shop in Chippewa Falls, WI. While the engine was out, he cleaned up the engine bay and removed the factory AC. The rebuilt factory engine now makes 325HP and 375 lb. ft. of torque and is paired with a Muncie m21 4-speed transmission and performance clutch. He also replaced the springs and shocks on the car and also replaced the u-joints on the driveshaft.

When he got the car, there were rust holes on the fenders, quarter panels, door corners, and the top channels; all of which were cut out and welded in with new metal. The rest of the body was sanded and straightened, and new bumpers were added on the front and the rear. The interior was gutted in preparation for repainting. The car was then painted by Cody and a friend back to the factory color Code 24 Bright Blue Metallic. The body was then reassembled, wet sanded, polished, and ceramic coated. The factory Z28 decals were added and new weatherstripping and smoke-tinted glass were also installed. Cody located the factory Z28 wheels which are aluminum N90 wheels and had them refinished and painted to match the car.

Then, the interior panels were replaced with re-dyed replacements – including the cracked dash and center console that had a hole cut in it for a speaker. He reupholstered the seats and added new foam. The original 8-track radio was refurbished and reinstalled. All lights on the car were converted to brighter LEDs. The Camaro has custom, color-matched LED headlights that have the logo of Cody’s favorite band, Electric Light Orchestra, who also sing the song that is the car’s namesake – “Mr. Blue Sky”. This 1980 Chevy Camaro Z28 has a custom collector license plate – MRBLSKY.

Mr. Blue Sky now looks and functions better than the day it came off the assembly line, with a few modern upgrades. Cody’s car has won 3 awards at car shows in the one year since completion – Best 2nd Gen Camaro, Best 1980’s car, and a Sponsor’s Choice. A quick behind-the-scenes iPhone pic of Cody and Sierra posing with the Camaro Z28, at Little Log House Pioneer Village.

After we concluded with their traditional engagement portraits, it was time to place the Camaro where we wanted it to be for the light painting and wait for the sun to set. Just before sunset, Cody and Sierra had their portrait done for version #1 of the light painting. Then, once it got dark out, we light painted everything in the photograph to bring out the details in Mr. Blue Sky and the rest of the entire scene. Both of the finished light paintings below look pretty darn cool! As I always do with every light painting that I create, I have a short build video on our YouTube channel to show the images that went into creating the finished image, and then the actual photographic build, one layer at a time in Photoshop. Enjoy, and have a great weekend! – M&J