I had the opportunity to light paint this beautiful car a few weeks ago on a nice summer evening here in Minnesota. My sincere thanks go out to Gregg Witt for allowing me to use his wonderful vintage gas station for another light painting project.

The car’s owners, Steve and Sandra, bid on and won this light painting project that we donated at the charity auction to raise money for BRIDGING during the 10,000 Lakes Concours d’Elegance back in late July. Oldsmobile debuted the “88” model line and the famous Rocket V8 in 1949. It quickly became a top seller. The 135 horsepower engine was the first mass-produced overhead-valve V8 in the United States. This motor started the postwar V8 craze and sent the other manufacturers scrambling to develop their own.

Oldsmobile innovations paid off with big sales increases and dominance on racetracks. In 1949 and 1950, the first two years of NASCAR, the Rockets won 14 out of 27 races. Some people say the Oldsmobile 88 was the first “muscle car”.

The “Holiday” body style was new in 1950, making the car a pillarless coupe. The open cabin made the coupe seem like a convertible. Holidays became known as “hardtop convertibles”.

The first owner of this car was a man who worked for Oldsmobile in Michigan. In 1979, the car was sold to an Ohio man who owned it for 38 years until 2017. Steve and Sandra have owned it since then.

Most Holiday Coupes have a contrasting white or blacktop. This car was special ordered all in one color, Chariot Red. It’ is stock with no power options, and it still retains its original 6-volt electrical system. It has been driven 60,000 actual miles, with 9,000 miles in the last 39 years.

The car won a Blue Ribbon at the 7th annual Competition of Elegance held this summer during the 10,000 Lakes Concours d’Elegance in Excelsior, MN. 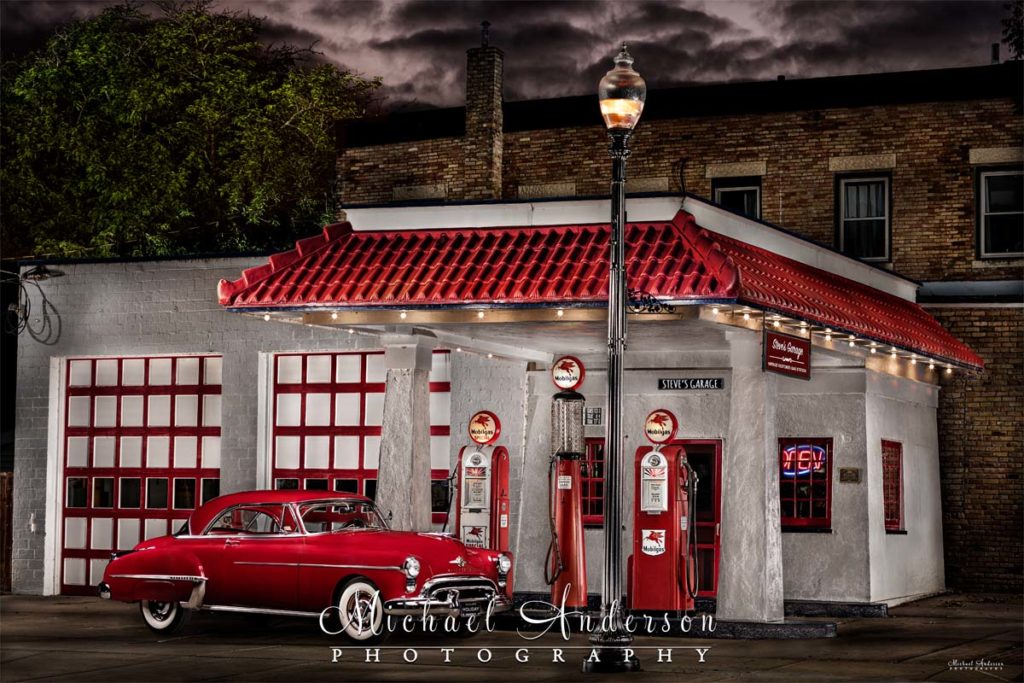 We have a short video on our YouTube Channel with many of the images that went into creating this unique light painting of Steve and Sandra’s 1950 Oldsmobile 88. All told, it took more than 150 of the more than 600 images we took that evening to create this one-of-a-kind light painting. It turned out pretty cool! – M&J